Gripping and tragic, Dalko is the definitive story of Steve “White Lightning” Dalkowski, baseball’s fastest pitcher ever. Dalko explores one man’s unmatched talent on the mound and the forces that kept ultimate greatness always just beyond his reach. 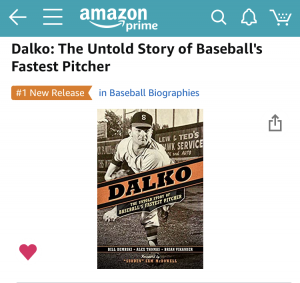 For the first time, Dalko: The Untold Story of Baseball’s Fastest Pitcher unites all of the eyewitness accounts from the coaches, analysts,

teammates, and professionals who witnessed the game’s fastest pitcher in action. In doing so, it puts readers on the fields and at the plate to hear the buzzing fastball of a pitcher fighting to achieve his major league ambitions.

Just three days after his high school graduation in 1957, Steve Dalkowski signed into the Baltimore Orioles system. Poised for greatness, he might have risen to be one of the stars in the Baseball Hall of Fame. Instead, he spent his entire career toiling away in the minor leagues. An inspiration for the character Nuke LaLoosh in the classic baseball film Bull Durham, Dalko’s life and story were as fast and wild as the pitches he threw.

The late Orioles manager Earl Weaver, who saw baseball greats Nolan Ryan and Sandy Koufax pitch, said “Dalko threw harder than all of ‘em.” Cal Ripken Sr., Dalkowski’s catcher for several years, said the same. Bull Durham screenwriter Ron Shelton, who played with Dalkowski in the minor leagues, said “They called him “Dalko” and guys liked to hang with him and women wanted to take care of him and if he walked in a room in those days he was probably drunk.” This force on the field that could break chicken wire backstops and wooden fences with his heat but racked up almost as many walks as strikeouts in his career, spent years of drinking all night and showing up on the field the next day, just in time to show his wild heat again.

What the Washington Post called “baseball’s greatest what-If story” is one of a superhuman, once-in-a-generation gift, a near-mythical talent that refused to be tamed. Steve Dalkowski will forever be remembered for his remarkable arm. Said Shelton, “In his sport, he had the equivalent of Michaelangelo’s gift but could never finish a painting.” Dalko is the story of the fastest pitching that baseball has ever seen, an explosive but uncontrolled arm.

For more information about the book, the authors, and additional content, visit the website www.DalkoBook.com and request a free sample chapter. 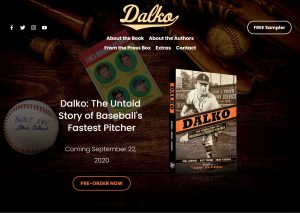 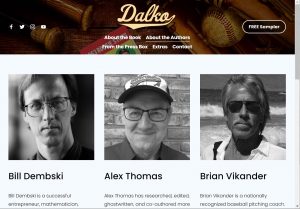 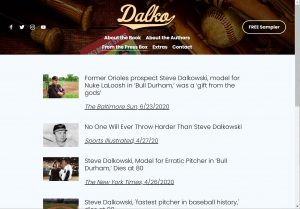 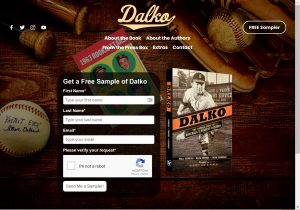 BILL DEMBSKI is a successful entrepreneur, mathematician, researcher, and author of more than twenty books. A lifelong learner and avid baseball fan, Dembski became interested in studying the science behind how fast a fastball can be thrown when he learned of an average-sized pitcher in the 1950s who threw faster than anyone then or since. This fascination led him to develop Dalko: The Untold Story of Baseball’s Fastest Pitcher with co-authors Brian Vikander and Alex Thomas.

Dembski holds doctorates in mathematics and philosophy from the University of Chicago and the University of Illinois at Chicago respectively, as well as a Master of Divinity in Theology from Princeton Theological Seminary. His other books cover a range of subject areas including engineering, theology, and education. He lives near Denton, Texas with his wife and three children.

ALEX THOMAS has researched, edited, ghostwritten, and co-authored more than twenty books across a variety of subjects. His career began as an advertising copywriter and radio producer, including work for Young & Rubicam, the country’s largest advertising agency at the time. Since then, he has worked in diverse roles, including music producer, radio syndication executive, publisher, editor, and communications consultant.

Alex’s most recent collaborations include It Takes Ganas: Jaime Escalante’s Secret to Inspired Learning (2016) and The Faces of Miracles (2019). Alex studied at Houston Baptist University and University College, Oxford, and he holds a degree from Vanderbilt University. Alex currently resides in Nashville, TN.

BRIAN VIKANDER is a nationally recognized baseball pitching coach. For more than thirty years he has specialized in mental skill preparation, pitching mechanics, and the meaningful communication of that material. His client list includes a former Cy Young Award Winner, MLB All-Stars, as well as youth, college, and professional players. For two years Brian worked alongside the father of modern pitching mechanics, Tom House, Ph.D., at the University of Southern California studying and developing the protocols associated with improving the biomechanics of pitching.

As a photojournalist, Brian has completed assignments to more than one hundred countries for National Geographic, The New York Times, and many other prominent periodicals. His photography can be found in major museum exhibits, corporate, and personal collections worldwide. He is a graduate of the University of Oregon and currently resides, exhibits his photography, and coaches from Tucson, Arizona.